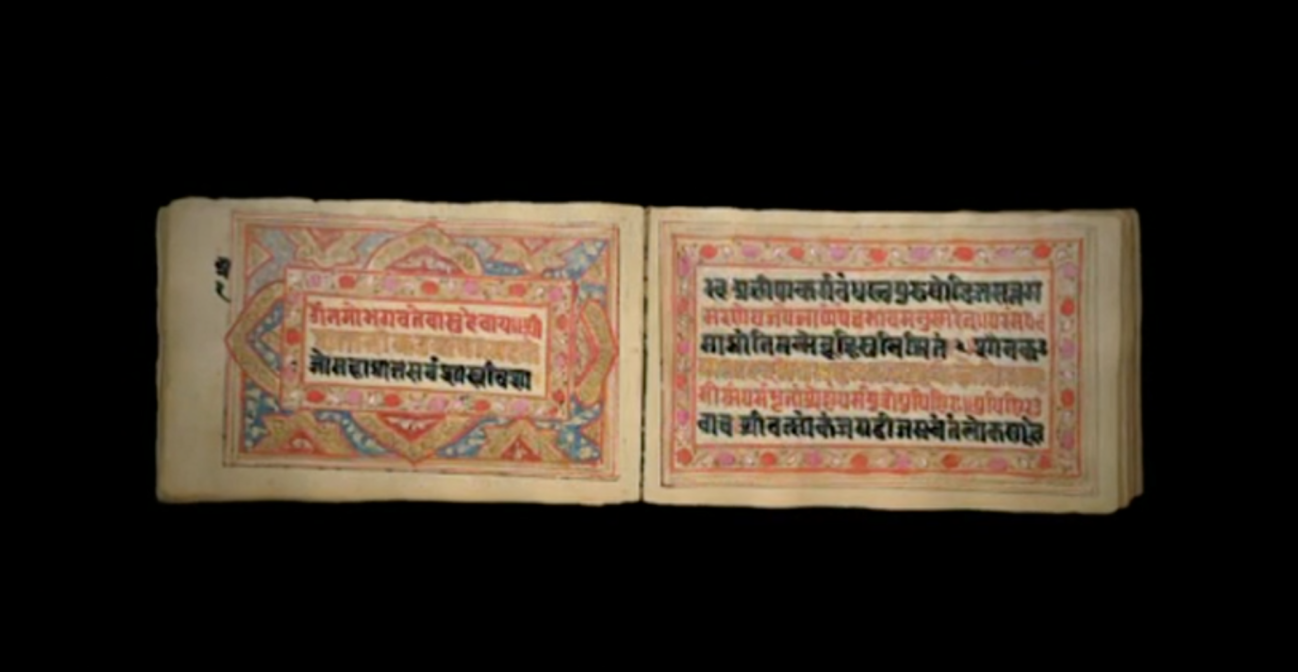 When you pick up a copy of the Gita, it is encouragingly slim, and the pages are only half-filled with verse. It seems like a quick read, and it can be—but if you really delve into the philosophy of life, death, right and wrong, you’ll find you’re spending a lot more time with the Gita than you might have expected.

“The Gita is the most philosophical and probably the most sacred book in modern Hinduism. It lays out the nature of the universe, the nature of the soul, what is truth. And, I think most importantly, the attitude that we should take when facing any difficulties on Earth.”

3120
According to legend, the great war described in the Mahabarata takes place.

563
Siddhartha Gautama, inspiration for the founding of Buddhism, is born.

First century
The Bhagavata Gita is composed as one section of Mahabharata.

1785
The first English translation of The Bhagavad Gita is published by Charles Wilkins.

The Bhagavad Gita was written in the first century CE, but it tells a story that was ancient even at that time. The Gita, as it is often called, is at once an independent story and part of a larger epic, the Mahabharata, that recounts a great civil war which, according to legend, took place in northern India around 3000 BCE.

Northern India was experiencing real war and turmoil when the Gita was written. The mighty Mauryan empire had fallen, and there were constant battles for power between the smaller kingdoms that sought to take its plac. The basic problem Arjuna faces in the Gita—how to justify killing one’s own family in a civil war—must have been lived by much of its original Indian audience.

The Gita is a Hindu text that has also influenced Buddhism. Buddhism was founded in India in the sixth century BCE, during the lifetime of Siddartha Guatama (563? — 483 BCE), and so it was younger than Hinduism, which developed over the centuries of 800-500 BCE. Both religions were practiced by the Indian people. Long after the fall of the Mauryan empire, the Gita remained an important text for all Indians, including Hindus.

One of its most important readers was Mahatma Gandhi. For Gandhi, the text was not just to be read but lived: “I have [made] an effort to enforce the meaning of the Gita in my own conduct [for] forty years… It is a misuse of our intellectual energy and a waste of time to go on reading what we cannot put into practice.”

This may seem surprising, since the Gita teaches that war and violence are acceptable in the service of dharma, while Gandhi completely renounced violence of any kind, even for the noblest of causes. Krishna teaches throughout the text that one can fight a real war and kill real people without sin so long as it’s done in support of dharma, one’s sacred duty to the good order of the universe.

Gandhi believed that when Krishna talks about killing, he is speaking metaphorically. What people should do is “kill” the negative thoughts and motives inside their minds, even though these thoughts and motives are so familiar that we may see them as “friends” or “family.” This is a kind of violence that is in line with ahimsa, or non-violent protest. Using this interpretation, Gandhi swayed the Indian independence movement away from violence and saw India become a sovereign nation in 1947 without firing a shot.

There is a reason why the Gita and The Odyssey have these connections. Sanskrit is a root language of ancient Greek and Latin, and indeed of all European languages except for Finnish and Hungarian. Modern European languages, including English, still hold traces of their Sanskrit roots. For example, there are correlations between some personal pronouns, like vayam (we), yuyam (you), asman (us); and some verbs. like bhu (be), and as (is).

Krishna
The Ninth Incarnation of Vishnu, Sustainer of the Universe. Krishna at once contains all life and all death, and ensures that dharma―universal order sustained by sacred duty―is maintained. He appears in human form, serving as Arjuna’s charioteer, but reveals his godhead toward the end of the teachings, terrifying Arjuna.

Arjuna
Arjuna, like the god who fathered him, is a conquering warrior. He is one of the five Pandava brothers who must, to regain their human father’s throne, fight their 100 Kaurava cousins to the death. Arjuna’s intrinsic nobility and courage are challenged by his awareness of the horror of killing his own family members. He turns to Krishna for help at this crucial moment.

Sanjaya
Sanjaya is a person given the supernatural power of being able to see and relate every aspect of the Gita—he knows the thoughts and hears the words of every character in the story, even if they happen miles apart at the same time. He tells Dhritarashtra what is happening on the battlefield and in Arjuna’s chariot as Krishna instructs him.

Duryodhana
Eldest son of Dhritarashtra, Duryodhana seeks to take the throne that belongs to his cousin Yudhishthira. When he has the chance to accept either Krishna’s army or the help of Krishna himself in battle, he short-sightedly chooses the army.

Dhritarashtra
Dhritarashtra was not able to take the throne because he was blind; his younger brother Pandu reigned instead. When Pandu left the throne, Dhritarashtra served as regent until the new king was established. But escalating tensions between his own sons and his nephews led to civil war, and now Dhritarashtra awaits the result of their great battle.

Adharma
Chaos and the disintegration of the order of the universe; adharma is the opposite of dharma. Heroes and warrior-kings of the epic embody dharma (order and sacred duty) while their foes embody adharma (chaos).

Arjuna
The hero of the story; Arjuna is one of the five Pandava brothers who fight for their rightful place in their father’s kingdom. Arjuna’s father was a warrior god, but his greatest counselor is the god Krishna.

Bhakti
Devotion to cosmic order that is free of personal desires.

Dharma
This is the sacred duty that supports the moral order that sustains the cosmos, society, and the individual.

Karma
This is the reciprocal relationship between cosmic order and human action. Karma is at once action and the result of actions as they cycle through the universe.

Krishna
Great Soul, Original Creator, Boundless Lord of Gods, Shelter of All That Is; Krishna is the manifestation of the Supreme Being who walks the earth in the shape of a human. In the Gita, Krishna is acting as Arjuna’s charioteer, but instructing Arjuna in the ways of dharma.

Yoga
The practice of discipline; yoga, as most westerners know it today, is a way of practicing bodily discipline to help the mind reach discipline.

5.1 The Bhagavad Gita – Getting Started

5.2 The Bhagavad Gita – Read the Text

Experts' View: The Meaning of Discipline 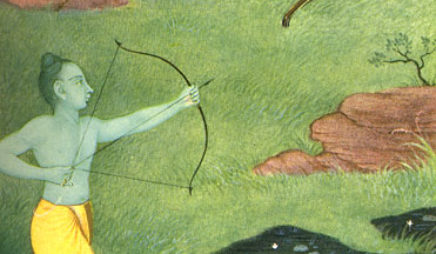 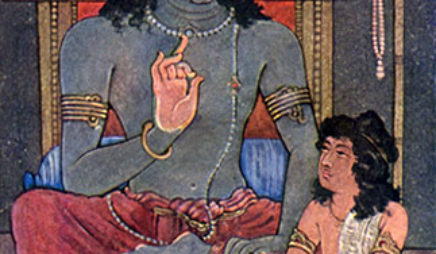 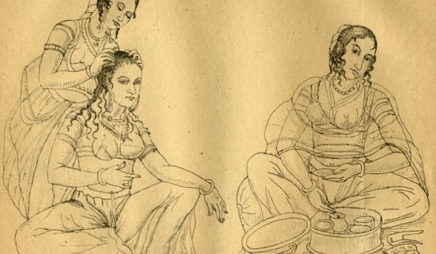 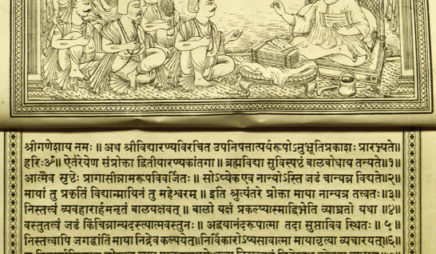 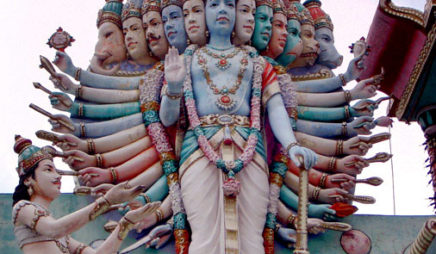