A Sea of Stories

The Arabian Nights, Scheherazade, Aladdin, “Open sesame!”, Sinbad the sailor, Ali Baba and the Forty Thieves: many Americans are familiar with parts of The Thousand and One Nights—or they think they are. In truth, many of the most familiar stories today were not in the original collection of ancient stories, but were introduced less than 200 years ago by translators. When you open the version of The Thousand and One Nights recommended by this series, you will probably find stories that you have never heard of. That said, the stories you do find will likely make the flying carpets and treasure caves you’ve heard of pale in comparison to the original tales of genies, sultans, spirits, and people high and low whose adventures fill The Thousand and One Nights.

“We all know these stories. We’re all familiar with these, even if you’re not literally familiar with every single story. This idea of a shared narrative that’s passed from generation to generation. I mean this is part of our DNA, as human beings.”

Folktales are told in Persia, Arabia, and India that will form the basis of The Thousand and One Nights.

Haroun al-Rashid rules as the third Caliph and greatest leader of the Abbasid Empire. He appears as a character in some of the tales of The Thousand and One Nights.

The collection of stories that became Alf Laylah wa Laylahwas written down, most likely in Syria.

Muhsin Mahdi, an Iraqi scholar of Arabian history, literature, and philosophy publishes a definitive modern edition of the Syrian archetype.

The stories in this collection have a long history. The first tales were folktales from Persia (today’s Iran), the Arabian Peninsula (today’s Saudi Arabia), and India, that were probably told for hundreds of years before the ninth century CE, when they traveled to Baghdad (in today’s Iraq). Baghdad was the glittering capital of the Abbasid Caliphate, the first Muslim empire, which reached its peak around 850 CE. The stories were retold and crafted by Muslim storytellers to reflect Abbasid culture and society, and to focus on the abundance of life in Baghdad, the great capital, the heart of the Islamic world, the center of an empire that reached from Tunisia in the west to Pakistan in the east.

There are roughly four categories of tales in The Thousand and One Nights: fables, faerie stories, romances, and comical or historical anecdotes. All have elements of magic. Animals talk, demons appear, spirits get involved in the world of the living. Nothing is considered impossible, everything is part of the divine providence of Allah, and therefore possible. The people in the stories have very concrete human desires and problems, but at the same time, they interact naturally with the supernatural in all its forms.

The stories are told by Shahrazad (known to most westerners as Scheherazade), wife of the mad sultan Shahrayar, who takes a new wife each day and kills her each night to prevent infidelity. Shahrazad staves off death by beginning a story which she can’t finish that night, leading Shahrayar to stay her execution until the next day. For 1,001 nights, the intelligent and powerful oral storyteller Shahrazad enthralls the king with her stories, many of which contain a moral for proper living, until at last she has cured him of his madness and they may live together in happiness.

In the version of The Thousand and One Nightsrecommended here, you will find all the delights of the original stories that lured a king from his madness and satisfied the imagination of an empire.

The story of the language of The Thousand and One Nights is inevitably at least two stories. The archetypes for stories were told in the languages of the regions in which they arose; in turn these stories were written and transmitted in other languages (sometimes making a return trip to their original languages in new variants!)

The original folktales came from Persia, India, Turkey, and Arabia, and were told in regional languages. When they traveled to Baghdad, they were eventually told in Arabic. The Syrian archetype was written in Arabic, in the twelfth century.

The first European translator, Antoine Galland (1646-1715), used the Syrian version, supplementing the written tales with others that were told to him by a Syrian storyteller. It was Galland who added the stories of Sinbad, Ali Baba, and Aladdin. Take the Aladdin story: Galland first heard it in 1709, and decided to include it in his translation. It was translated from French to Arabic in 1787, and appeared in an 1808 collection by a man who claimed to have copied it from the Syrian archetype. He had actually just translated the French story into Arabic, but it was too late to stop Aladdin—he got into English translations of Arabic texts that had included the French story and became one of the most popular stories of The Thousand and One Nights.

Our primary text for this series, the translation by Husain Haddawy, is based on Muhsin Mahdi’s 1984 edition of the early Syrian manuscript.

A meek fisherman releases a demon and unleashes a series of adventures.

The historical sultan of Baghdad, whose wise rule stands in contrast to the reign of terror of Shahrayar.

A simple merchant seeks to cheat death at the hands of an implacable demon.

A humble porter learns the dangers of mixing with ladies above his station.

The murderous sultan whose practice of killing a new wife each night is stopped by the healing stories of Shahrazad.

(also known as Scheherazade) The brilliant young woman who risks her life to cure Shahrayar, spinning a new tale of love, death, and adventure each night.

The Three Ladies of Baghdad

Why do three rich and lovely sisters take the Porter home with them? And how does he end up at death’s door?

A meek fisherman releases a demon and unleashes a series of adventures.

The historical sultan of Baghdad, whose wise rule stands in contrast to the reign of terror of Shahrayar.

A simple merchant seeks to cheat death at the hands of an implacable demon.

A humble porter learns the dangers of mixing with ladies above his station.

The murderous sultan whose practice of killing a new wife each night is stopped by the healing stories of Shahrazad.

(also known as Scheherazade) The brilliant young woman who risks her life to cure Shahrayar, spinning a new tale of love, death, and adventure each night.

The Three Ladies of Baghdad

Why do three rich and lovely sisters take the Porter home with them? And how does he end up at death’s door?

13.1 The Thousand and One Nights – Getting Started

13.2 The Thousand and One Nights – Read the Text

13.3 The Thousand and One Nights – Expert’s View

13.5 The Thousand and One Nights – Connections

13.6 The Thousand and One Nights – Key Points

Transcript: The Thousand and One Nights Video Transcript

Slideshow: The Thousand and One Nights 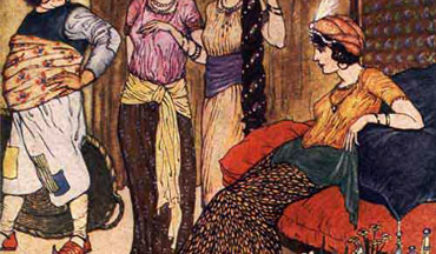 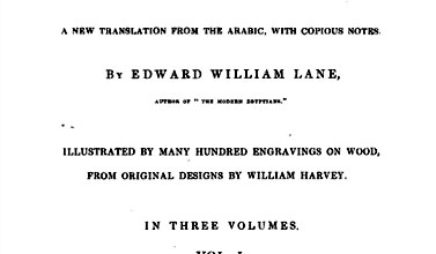 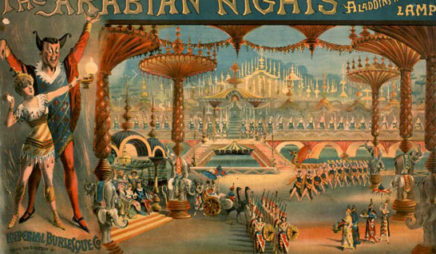 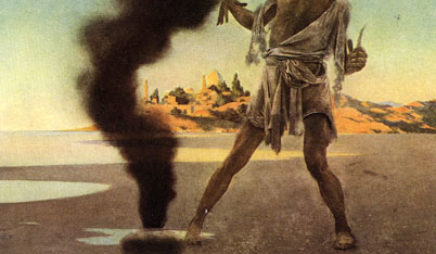