Classroom Resources > Brick Playbook: Parent Edition > 13. It All Adds Up

It All Adds Up

Use bricks to practice adding three or more numbers. 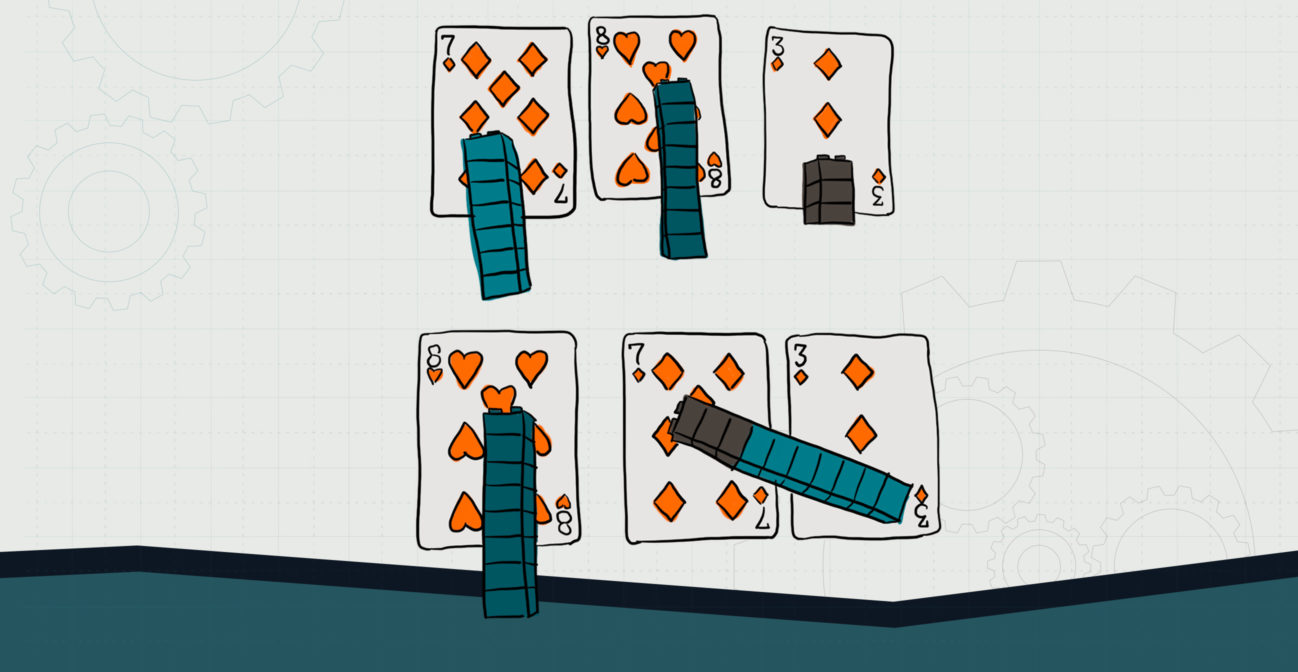 Objective:
Child will be able to add three numbers using objects and regrouping.

Essential Question(s):
What strategies can you use to add multiple numbers together?

Special Materials:
A deck of cards without the kings, queens, and jacks; pencil and paper

Bricks Required:
Each group of 3 students will need 9 2×2 bricks of three colors

The world around is plentiful. Let's quantify it by building bar graphs.

Design and create rulers to develop an understanding of the basic principles of measurement.

Use various methods to find the area of irregular shape objects.

Develop floor plans of your home or school and develop methods to measure perimeter.

Design with bricks, and strategize on ways to measure area.

Project 6 Every Brick Tells a Story

Use brick design to write the narrative of a story.

Explore the basics of multiplication and the communiative property with bricks.

Project 9 Sort It Out

Develop and use pattern recognition for sorting and categorizing bricks.

Project 13 It All Adds Up

Use bricks to practice adding three or more numbers.

Explore the properties of addition using playing cards and bricks.

Project 15 Not Just One Direction

Explore the properties of subtraction and how they differ from addition.

Explore the world of matter through brick assembly and dissasembly.

Explore "scaling" through the resizing of brick creations

Use Engineering principles to study forces and mass.

Explore the world of forces and their effects on mass.

Explore the world of spinning object and their design challenges.

Make observations about materials and their properties that make them unique.

Project 25 State of the Brick

Use bricks to investigate the law of conservation of matter.

Project 26 A Roll of the Brick

Complete fraction multiplication with the assistance of bricks.

Project 27 Greater Than One

Complete fraction multiplication with the assistance of bricks.

Contemplate the motion of celestial bodies through shadows.

Project 30 Pump Up the Volumes

Design objects and investigate the volume of the objects.

Project 31 The Building Bricks of Life

Project 32 Building Out Of The Box

Bricks are used to quantify and solve equations and inequalities.

Project 34 Bricks Are A Factor

Explore the directionality of numbers represented by positives and negatives.

Use plotting to design polygons and study their properties.

Project 38 In the mx

Investigate rate of change through the concept of slope.

Bricks are used to investigate system of equations.

Project 40 What Are The Chances?

Explore probability and its relation to fractions and percentages.

Use bricks to investigate vector addition.