Reading & Writing in the Disciplines 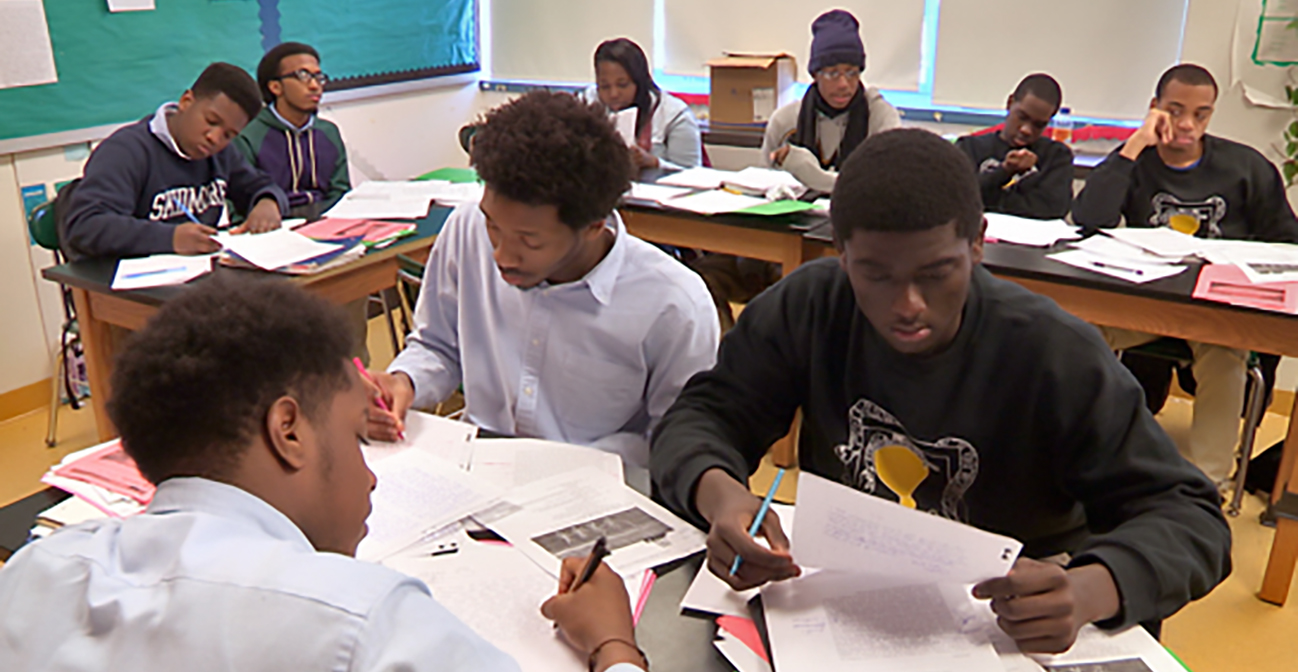 The overriding goal of these units to is to help you engage students in authentic mathematical activity that reflects the literacy practices of the field of mathematics while also providing opportunities for students to more deeply learn the mathematics content you are addressing with them. The hope is also that, through this work, greater numbers of students will recognize their own capacities to do mathematics, will develop a greater interest in and passion for mathematics, and will consider entering the field of mathematics as a profession.

We all use math every day. To predict weather . . . to tell time . . . to handle money. Math is more than formulas and equations. It’s logic; it’s rationality. It’s using your mind to solve the biggest mysteries we know.

Reflect: When considering what is meant by disciplinary literacy in the field of mathematics, what would come to mind? How do mathematicians read, write, speak, and listen? What are the literacy demands of each?

In order to consider these questions, it can be useful to examine the work of a fictional mathematician named Charlie Eppes, the star of the CBS program NUMB3RS. Through a collaboration with the Los Angeles FBI, Eppes has many opportunities to use mathematics to solve real-world problems in applied settings.

It can also be helpful to consider the work of theoretical mathematician Julia Robinson, who spent most of her professional life pursuing a solution to a single but important mathematical problem.

A Snapshot of an Applied Mathematician at Work

The paved playground at an elementary school in Los Angeles is being repaired. Groups of children and several teachers watch the process from a distance. As the backhoe digs into the pavement, a large sinkhole forms, and several of the children fall into it. What’s happening? What caused this sinkhole to happen? Did it occur naturally, or was it the result of faulty work on the part of the construction company? Charlie Eppes, a mathematician and professor at CalSci, is called in to investigate.

As the episode unfolds, we learn that the paving material used for the school playground is a composite material made from treated and recycled toxic waste. We also learn that many of the students at the school have neurological ailments or cancers. These observations lead Eppes to use his mathematics expertise in two additional ways—first, in his analysis of the frequency of neurological ailments and cancers at the school site compared to the frequency in the larger area, and second, in his analysis of the amount of toxic waste taken in and processed by the construction company and the amount they report using in their construction work. As a result of Eppes’s mathematical contributions to the investigation, the FBI resolve the case. The CBS program NUMB3RS provides many interesting examples of how applied mathematics can be used in the investigations of a wide range of criminal cases.

A Snapshot of a Research or Theoretical Mathematician at Work

Many mathematicians are not involved in solving real-world problems and, instead, focus specifically on solving mathematical problems associated with proofs and theorems. These may indeed seem far removed from anything real, but this work is also very important, as it helps move the field of theoretical mathematics forward and may even have important applications in the future.

An example of what it means to do mathematical research starts with the German mathematician David Hilbert (1862–1943). Hilbert identified a list of important mathematical problems that he believed would be important to solve during the next century. Julia Robinson, after finishing her Ph.D. in mathematics at UC Berkeley, began to work on Hilbert’s Tenth Problem. The film Julia Robinson and Hilbert’s Tenth Theorem by George Csicsery captures her passion for and commitment to this challenging piece of mathematics.

Hilbert’s Tenth Problem involves finding an effective method for determining if a given Diophantine equation is solvable in integers. This problem “begged for an unsolvability proof,” said Martin Davis, professor emeritus at NYU and one of Julia’s collaborators interviewed in the film Julia Robinson and Hilbert’s Tenth Theorem. Davis conjectured that the combination of ideas from logic and ideas from the theory of numbers made “a heady mix” that Robinson probably found particularly exciting.

Robinson went on to spend the rest of her life attempting to solve Hilbert’s Tenth Problem. She made important contributions to mathematics while also providing the groundwork that ultimately led to a solution to the problem. The story of Robinson’s engagement in this mathematics problem, and her close collaboration with the Russian mathematician Yuri Matiyasevich as well as other mathematicians, is the focus of the film.

The Disciplinary Literacy Practices of Mathematicians
Use the example of the fictional Charlie Eppes, who is doing applied mathematical work through his collaboration with the FBI; the example of Julia Robinson, who worked as theoretical or research mathematician; and your own experience solving mathematics problems to reflect on the literacy practices associated with mathematics.

Apply: What are your initial thoughts on the literacy practices associated with the discipline of mathematics? What do we know, or what might we conjecture, about how mathematicians read, write, speak, and listen? Fill out this chart [PDF] to help you organize your ideas.

What Does the Research Literature Say about Disciplinary Literacy in Mathematics?

During think-alouds, the mathematicians emphasized rereading and close reading as two of their most important strategies. One of the mathematicians explained that, unlike other fields, even “function” words were important. “‘The’ has a very different meaning than ‘a,’” he explained. . . . Math reading requires a precision of meaning, and each word must be understood specifically in service to that particular meaning. In fact, the other mathematician noted that it sometimes took years of rereading for him to completely understand a particular proof. . . . (p. 49)

Shanahan and Shanahan (2008) also point out that similar complexities apply to the reading of letters and numbers, particularly as these mathematical symbols might have different meanings in different contexts.

The complexities associated with reading mathematical material also have their counterparts in writing, where the use of language, notation, and representations also are expected to be very precise and error-free. But mathematicians engage in other kinds of writing beyond the formal and finished writing that one sees in mathematics publications. This more informal writing might consist of a personal log of questions and insights, written communications with other mathematicians and colleagues, notes or PowerPoint slides for a mathematics presentation, or early drafts of more formal mathematics papers,

Explore: Select one of the following papers to read:

Reflect: How does it feel to read portions of a paper of this sort? What must it have taken to write?

What Are the Implications for the Mathematics Classroom?

Because the Standards for Mathematical Practice provide opportunities to support disciplinary literacy in mathematics, it will be useful to look carefully at each to consider exactly what literacy opportunities they provide as well as how they connect to your own experience as a mathematics learner and the experiences of your students.

Reflect: Read the CCSSM Standards for Mathematical Practice [PDF] according to the instructions below.

Examining the Disciplinary Literacy Practices of an Applied Mathematician

Video and Reflection: Now watch Mathematics in the Real World: An Epidemiologist, which follows epidemiologist Traci Bethea in her mission to make an impact on the health and quality of life of African Americans. Through a series of research studies on a wide array of health issues with a disproportionately negative impact on black women, Bethea uses statistics and comparative data to advocate on behalf of health-care reform. You may want to take notes on the questions below.

Examining the Disciplinary Literacy Practices of a Secondary Mathematics Classroom

Video and Reflection: Now watch Thinking Like a Mathematician in which students are working on exponential and logarithmic functions using a real-world context of earthquakes. You may want to take notes on the questions below.

Classrooms that reflect the Standards for Mathematical Practice and provide opportunities for student engagement in disciplinary literacy don’t just happen by themselves. In order to create such classrooms, teachers need to consider how to design mathematics lessons that engage students in the Standards for Mathematical Practice and provide students with opportunities to read, write, speak, and listen like mathematicians. This involves the following considerations:

These considerations assume that all students have the capacity to successfully engage in authentic mathematical activity. The assumption grows out of the work of Carol Dweck (2006), who defines a “fixed” mindset as the belief that intelligence is “fixed” and that success is based on this innate ability, while a “growth” mindset is the belief that talent and ability are the result of effort and persistence. The implications of these constructs for mathematics teaching and learning have been further developed by Jo Boaler (2013) and others, who advocate for the use of a “growth” mindset to communicate the belief that all students have the capacity to be successful in mathematics.

In the following units, you will explore what it means to help students learn to read, write, speak, and listen like mathematicians and how you might design lessons that engage students in these disciplinary literacy practices. As you move through this material, you will watch and reflect on a number of videos that capture aspects of mathematics reading, writing, speaking, and listening in secondary classrooms. You will also periodically engage in activities, many of which you are invited to try with your students, in which you will reflect on reading, writing, speaking, and listening. You will also be provided with a range of resources designed to support your efforts to strengthen disciplinary literacy practices in your mathematics classroom.

Reading & Writing in the Disciplines

5.1 Mathematics in the Real World: An Epidemiologist

Follow epidemiologist Traci Bethea in her mission to make a positive impact on the health and quality of life of African Americans.

Supplementary: The Mathematics of Doodling

Unit 0 About This Course

unit 1 What Is Disciplinary Literacy?

unit 8 Bringing It All Together – Mathematics

unit 12 Bringing It All Together – Science

unit 16 Bringing It All Together – English

unit 20 Bringing It All Together – History/Social Studies