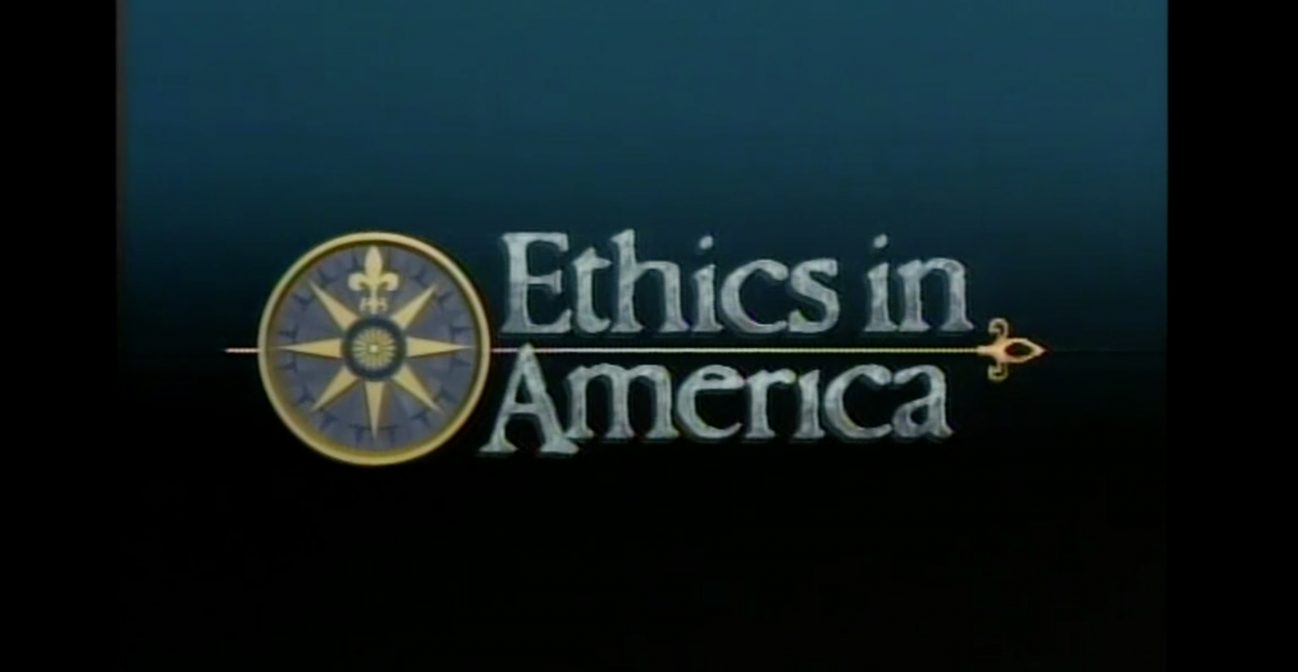 “I can’t tell you how much my family enjoyed the ethics show last night. My two teenagers, my husband and I sat around for over an hour after the show and discussed not only the questions raised on the show but other ethical questions as well. It really felt wonderful – I think this was what my vision of what parenting was all about when I was a new mother. Thanks to PBS, it came true for one brief shining moment! We are all looking forward to the next show.”

“It is with great pleasure I write to thank all of you for this program in particular and all I have seen of the Annenberg/CPB Project. Television at its finest. I’m extremely delighted by whoever develops the format and the issue to be presented.”

“Ethics in America, a diverse, articulate, and witty discourse about ethical dilemmas, makes stimulating viewing in ‘Do Unto Others’ and ‘Under Orders, Under Fire,’ two segments sampled from a provocative 10-part television series.”

“Ethics in America is a brilliant use of television – as a public forum for intelligent discourse. Highly recommended.”

“Ethics in America shows extensive, challenging discussions skillfully condensed into compelling one-hour programs as the camera prowls the arena, focusing on the individual speaking, glimpsing the reaction of another player in these ethical scenarios, and perhaps most effectively, capturing the perplexed expressions of participants visibly tussling with the issue at hand.”

“Ethics in America…becoming immersed in the diverse, articulate, and witty discourse that evolves, the viewer is treated to intelligent and truly stimulating fare…this is another accessible and moderately priced series.”

“Television seldom asks us, its viewers, to exercise our minds, nor does it often ask us to examine our consciences and morality, in the way that Ethics in America does.”

“The whole series is extremely reasonably priced for such a high quality product, and are very highly recommended for public library collections and for schools in which the titles can be integrated into specific curricular units.”

“Ethics in America examines contemporary ethical conflicts and gives students a grounding in the language concepts and traditions of ethics. The course will provide young adults with the intellectual tools they need to analyze moral dilemmas in their personal and professional lives.”

“When so much is being written and said about the decline of ethical behavior in our country, Ethics in America is a timely effort to allay confusion over the difference between what we have a right to do and what is the right thing to do.”

“Lively, intelligent, surprisingly witty and down-to-earth, Ethics in America is fun to watch. It proves once again that when abstract subjects are presented in a palatable, entertaining form, television does indeed have the ability to make us think – and enjoy it.”

“Ethics in America is the best public affairs series since “Power of Myth.”

International Film and TV Festival of New York
1989 Finalist Award for “To Defend a Killer” and “Under Order, Under Fire Part I”

Ohio State Award
1990 Award for “Under Orders, Under Fire”

About the Producers and Advisors

Producers:
Ethics in America is produced by Columbia University Seminars on Media and Society. The television course print materials were designed and developed by public television’s station, WNET. The two accompanying texts are published but Prentice Hall.

Produced by Columbia University Seminars on Media and Society. 1989.

Must we house the homeless or report a child abuser? A panel including Surgeon General C. Everett Koop, Faye Wattleton of Planned Parenthood, and Willard Gaylin of the Hastings Center discusses the question of community responsibility.

2 To Defend a Killer

What rights do the guilty have? Ethical dilemmas of our criminal justice system are discussed by U.S. Supreme Court Justice Antonin Scalia, defense attorney Jack Litman, and philosopher John Smith of Yale.

Jeane Kirkpatrick, Joseph A. Califano Jr., Senator Alan Simpson, Peter Jennings, and others address the problems of trust — within government, between one public official and another, and between the government and the public.

Should you save the mother at the risk of losing the baby? Doctors from the National Cancer Institute and Memorial Sloan-Kettering Cancer Center discuss controversies created by modern medicine with C. Everett Koop, journalist Ellen Goodman, and others.

5 Anatomy of a Hostile Takeover

6 Under Orders, Under Fire (Part I)

How do we wage war when the enemy dresses as civilians and children throw bombs? Generals William Westmoreland, David Jones, and Brent Scowcroft, correspondents Peter Jennings and Mike Wallace, and others question the duty to follow orders and a commander's obligation to protect soldiers.

7 Under Orders, Under Fire (Part II)

The carnage of My Lai raises the issue of confidentiality between the soldier, his religious confessor, and military justice. Generals debate the clash between military tribunals and the right of confidentiality with Chaplain Timothy Tatum of the U.S. Army War College, the Reverend J. Bryan Hehir of the U.S. Catholic Conference, and others.

Does finding a cure justify putting test subjects at risk? C. Everett Koop is joined by Dr. Arnold Relman, editor of the New England Journal of Medicine, and other distinguished panelists in a discussion of the medical research field.

What conduct on the part of a public official is relevant to "the public's right to know?" Panelists from both sides, including Washington Post publisher Katharine Graham, Peter Jennings, Mike Wallace, and Geraldine Ferraro, debate this issue.