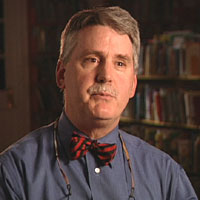 “My one lacrosse coach was an archaeology professor, and he would take students out on archaeological digs at Indian sites…and it always came out, here were loads and loads of questions all the time, but not always answers to the questions. And I realized that the pressure’s off now. To allow children to simply ask questions, to wonder about things…that’s at the heart and soul of science…the question is what it’s all about. ”

Tim Mackey has taught fifth grade at the James Buchanan Elementary School in Lancaster, Pennsylvania for thirty years. During that time, he continued his professional development by earning a Master’s degree in Education from Millersville University in Pennsylvania. Tim has worked on developing science units in collaboration with the Lancaster County Park and Muddy Run Environmental Center, both in Pennsylvania. Tim has also been involved in environmental studies at Echo Hill Outdoor Environmental School, located on the shores of the Chesapeake Bay in Maryland.

Tim is a firm believer in using inquiry methods to teach science, but acknowledges an intriguing challenge to teaching this way. “When teaching a lesson that is inquiry-based, you’re never sure where the kids are going to go with it. But that’s the whole point. You have to lay it out there, give students the materials, and let them deal with it, question it, look at things, and discover things on their own. It’s — it’s unscripted. You’re not always sure what’s going to happen…You have to be prepared to veer off the path periodically. If you are not intimidated by that, it can be a lot of fun.”

The fifth graders in Tim’s class engage in an activity that he designed called: “Exploring Soil” (you can download the lesson plan as an Adobe PDF document). His emphasis on the inquiry process connects this exploration to other science activities and distinguishes “playing in the dirt” from undertaking a scientific approach to studying soil. “The world of children is the world of play,” says Tim. “And at this point, they’re old enough now as fifth graders to be able to stop and take a good look….That’s the hard part…to go from the excitement of getting your hands dirty to the discipline of…what’s in this, and what are we going to learn from this?”

Tim starts the activity by asking questions to determine what his students think about soil. He asks, “What is soil? What is dirt? Is there a difference, or are they just synonyms for the same thing?” He describes his students as being “city kids” who are likely to equate soil with the maintained fields that they play on, and think that all soil is pretty similar.

After bringing the students outside and digging up a shovel-full of soil from the school property, Tim provides his students with core samples of soil taken from six very different locations: a river bank, an Amish farm, a baseball diamond, a mulched area in his yard, a landfill and a construction site. In small groups, students make observations and record the properties of their samples, and try to predict where the soil was obtained.

Tim was pleased with the results of the soil investigation. “Most of them (the students) learned from this lesson that soil isn’t all the same. It does vary from location to location. And there’s a variety of things that can affect the soil and change it.” Tim will use their soil investigation as a springboard to learning about water quality.