What are soil horizons? 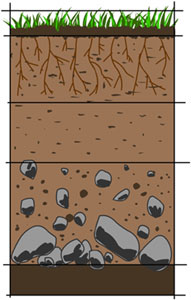 As you drive along highways, you are likely to pass places where the roadway cuts through soil. Have you noticed layers in these road cuts? During soil formation, inorganic materials (e.g., minerals) and organic materials (e.g., decaying plants and animals) are transformed and, with the flow of water through the soil, settle downward which creates layers called soil horizons. An established method for describing soil horizons labels them, form the surface down, O, A, E, B, C, and R. There can, however, be subdivisions of the major horizons in some soil profiles. Also, not all of the soil horizons are represented in any given location; the presence or absence of these layers helps to classify soil types. Soils have different and unique profiles depending on a number of factors, including: climate, organisms, parent material, topography, and time.

What are the characteristics of different soil horizons?

O Horizon: The O, or organic, horizon is found in soils formed under forest vegetation. It is composed mostly of vegetation that has fallen to the ground and the remains of animals such as insects, causing it to be dark in color.

A Horizon: Below the O horizon lies the A horizon, which is commonly called topsoil. It is the first soil horizon made mostly of minerals from the weathering of the underlying parent material, but it can also contain decomposed organic material, which gives it a dark color. 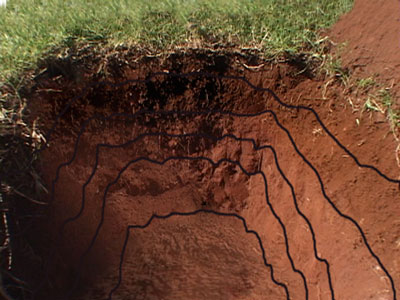 Can you identify possible horizons in this soil profile? Roll your mouse over the image above to see horizon lines.

E Horizon: In areas that are or once were forested, there can sometimes be an E horizon beneath the A horizon. E stands for “eluviation,” which is the movement of dissolved or suspended material out of a horizon. Water entering the soil moves downward through the O and A horizons, and dissolves various soil materials (iron and aluminum oxides, clay particles, and organic matter) before carrying them to the E horizon, and then on to deeper levels. This process of leaching creates the E horizon’s white or grayish color. It is lighter in color than the layers above or below it.

C Horizon: Directly below the B horizon is the C horizon. It consists of the “raw” or “parent” material from which the soil was created. This includes partially weathered bedrock, materials that were deposited by the wind or water, volcanic material, organic matter, glacial deposits, and other materials.

R Horizon: If unaltered bedrock is within a few feet of the surface, it is called the R horizon.

Have you ever wondered why the soil in a desert looks so different from the soil in a forest? Soils in different places have their own unique properties — color, texture, moisture, depth, layers, etc. — and the nature of these properties is related to factors that influence soil formation. Five factors that affect soil formation are climate, organisms, parent material, topography, and time. Each of these factors interacts with the others during the processes of soil formation.

Climate: Soil formation processes are directly linked to the climate in which the soil forms. Climate strongly influences the rate of the weathering of rocks and soil. The amount of precipitation in a region controls the amount of water that enters the ground, which greatly affects the rates of chemical and physical weathering. Temperature also influences the formation of soil; in warm climates, soils weather more rapidly than in cooler climates. The combined influence of temperature and precipitation is also significant. For example, if precipitation is abundant but temperatures are cool, the processes of decomposition and weathering are much slower than if temperatures are warm. In the tropics, where it is warm year-round and rainfall is abundant, soil weathering occurs very rapidly.

Organisms: Plants, animals, and other organisms, whether alive or dead and decomposing, have a considerable influence on soil formation because they introduce nutrient-rich organic matter to the soil. Plants in particular have a profound influence on the amount of organic matter incorporated into the soil. If vegetation is scarce, as it is in the desert, there will be less organic matter. Animals like insects and earthworms tunnel and burrow in the soil, introducing water and air and bringing subsoil material to the surface and topsoil down. As earthworms feed, for example, they break down decaying plant matter and eliminate it in their waste, which both enriches the soil and makes it more porous. Also present in soil are microorganisms that contribute to the recycling of nutrients by decomposing plant and animal remains. Weak acids produced by some microorganisms can even dissolve nutrients in rocks. In this way, certain fungi and bacteria release phosphorous and calcium from minerals in rocks and are important rock-weathering agents. 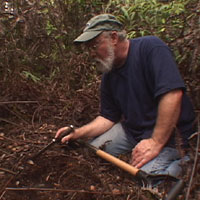 Topography: Topography refers to the shape and direction of the land surface, and its slope. This factor regulates how water will travel through a landscape, and affects the ability of the soil to resist erosion by water. Erosion will move soil from higher to lower elevations, causing soils at the bottom of a hill to get more water than soils on the slope of a hill. Soils tend to be thicker on flat, low-lying land and thinner on steep slopes. South-facing slopes tend to be warmer than slopes that face north because they receive more sunlight. Because of this, soils on south-facing slopes will tend to be more weathered and drier at any given time.

Time: Time addresses how long the other factors of soil formation have been at work weathering the parent material. Younger soils tend to be less developed.

Go to the NASA Soil Science Education Home Page for links, pictures of soil profiles and much more information: http://soils.gsfc.nasa.gov