Readings and photographs illuminate the works of 13 American poets in this video series. 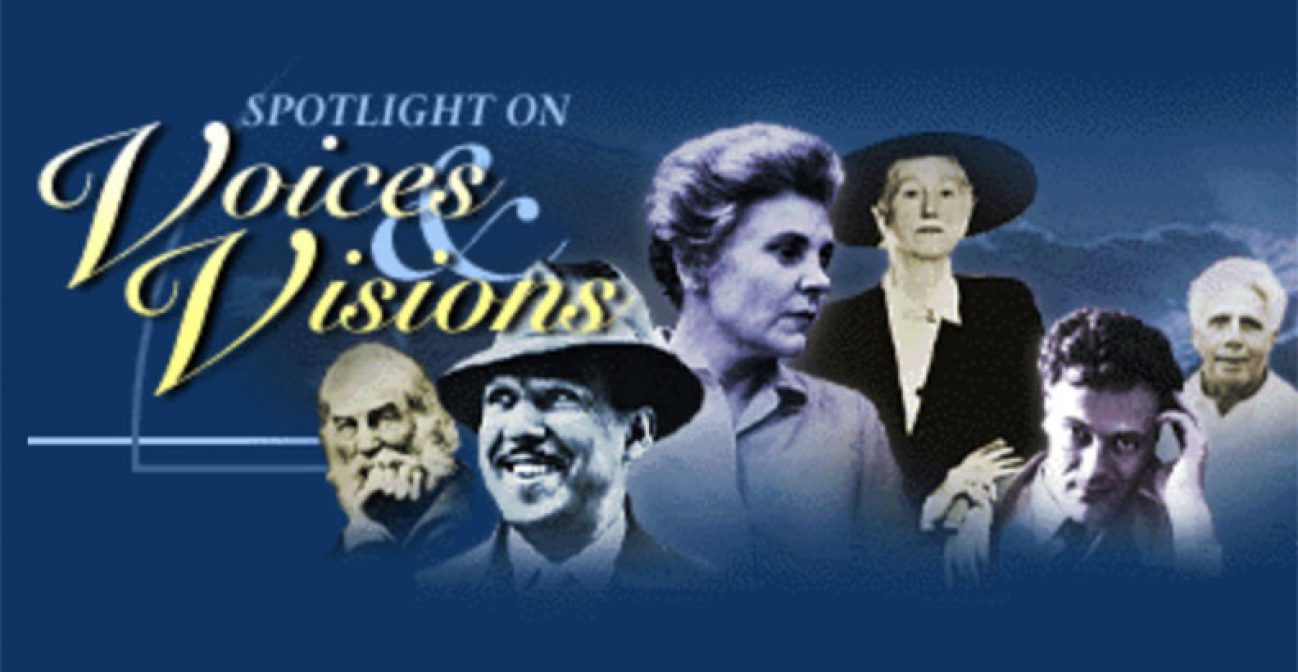 The Spotlight on Voices & Visions explores the lives and works of 13 of America’s most famous modern poets. Click on a poet’s name to start your exploration.

The lives and works of 13 renowned American poets are interpreted through dramatic readings, archival photographs, dance, performances, and interviews in this inspiring series. Illustrative poems in each program are accompanied by insights into their historical and cultural connections. The series covers the terminology of poetry and the larger role of poets in American and world literature studies. Poets include Langston Hughes, Robert Frost, Emily Dickinson, and Elizabeth Bishop.

“The programs have prompted long after-dinner conversations with neighbors…a roundtable reading of Stevens’s and Eliot’s poems…and a great deal of rewarding solitary reading as well. I’m hoping for a Voices & Visions II. I want you to know how important this series has been for me, my family, and our friends and neighbors.” – Viewer, Staten Island, NY

“Your presentation of Dickinson was thorough, beautiful, moving. I enclose a poem I sent to a girl in ’32 with the then-current book of Dickinson’s poems.” – Viewer, Pasadena, CA

“TV and poetry usually do not mix. But in this series of 13 thoughtful and evocative essays on American versifiers, the alchemy was just right.”

“Voices & Visions continues on its way impressively. A poem’s not made of beautiful thoughts, it’s made of words. And the very arrangement of those words is a key to the heart of the poem.”

“Voices & Visions is beautifully produced and while it will not make poetry any more ‘commercial,’ it does demystify and demythify the poet, revealing the human being and the humanity beneath.”

“Voices & Visions not only brings the viewer up-close-and-personal with poets, but shows poets reading their own work.”

“Poetry has long been considered an effete diversion of snobs. This reputation is inaccurate, has done little to alter America’s general apathy towards one of literature’s most enduring forms. That’s why Voices & Visions is so remarkable because it brings the supposedly snooty medium of poetry into the nation’s homes via the supposedly coarse medium of television, elevating the latter while making the former exceedingly accessible.”

“Each one-hour episode of Voices & Visions focuses on the work and days of a major figure. Each is a fresh attempt to get us to see both the self who acted and the mind that created.”

“Voices & Visions focus on the poems rather than the poets and use the medium of television to communicate how poems work, what they mean and how history, imagination and language are embodied in poetic creation.”

“Voices & Visions is about a living heritage, a unique national literature, which has come to influence poets and writers in almost all other countries. Voices & Visions has tried to capture a variety of the passionate voices which together make up the American Canon. “

The Spotlight on Voices & Visions links and video clips were researched, selected and annotated by William Wargo, an instructor at Community College of Vermont and St. Michael’s College.

Produced by the New York Center for Visual History. 1988.

From childhood in Nova Scotia to travels in Brazil, this program illustrates the geographic spirit of Bishop's life and works with scenes from her poems.

Diverse locations and dramatizations of his life illustrate Crane's poetry and his greatest work, "The Bridge."

Eliot's life, influence, and poetry from the bold originality of "Prufrock" to the probing, meditative style of "Four Quartets" are explored with photos, archival footage, and discussion with friends, critics, and scholars.

Frost's image as elder statesman is vividly contrasted with his vigorous, poetic exploration of the darker forces of nature and the human condition. Readings and interviews with the poet reveal compelling insights into his work.

Hughes wrote of the beauty, dignity, and heritage of blacks in America. Interviews, music, and dance performances convey his work and influence, discussed by James Baldwin and biographer Arnold Rampersad.

Lowell's political passion encompasses much of his greatest poetry. Lowell himself reads from his work. Elizabeth Hardwick, Robert Hass, and others discuss his development and style as illustrated by "Lord Weary's Castle" and "Life Studies."

Funny, formidable, and paradoxical, the poet and her work are analyzed by critics and friends, including Monroe Wheeler, Grace Shulman, and Patricia Willis. Her most memorable poems display her power of observation and moral force.

The creative intensity with which Plath confronted her experiences as daughter, wife, mother, and writer is explored in documentary and archival footage intercut with visualizations of her work.

The most controversial of American poets — artistic catalyst, legendary confidant, and author of brilliant cantos — Ezra Pound and his poetry and role in the modernist movement are explored by friends and critics.

Brilliant readings of Whitman's poems demonstrate his American vision and style and vividly convey their poignance and sheer power. Whitman's sources, including Emerson, the King James Bible, opera, and political oratory, are revealed.

"No ideas but in things," Williams's aesthetic dictum sought to capture, not analyze. A collage of documentary footage, interviews, animation, and dramatization capture the poet's often visual work and intense life.