Destinos: An Introduction to Spanish 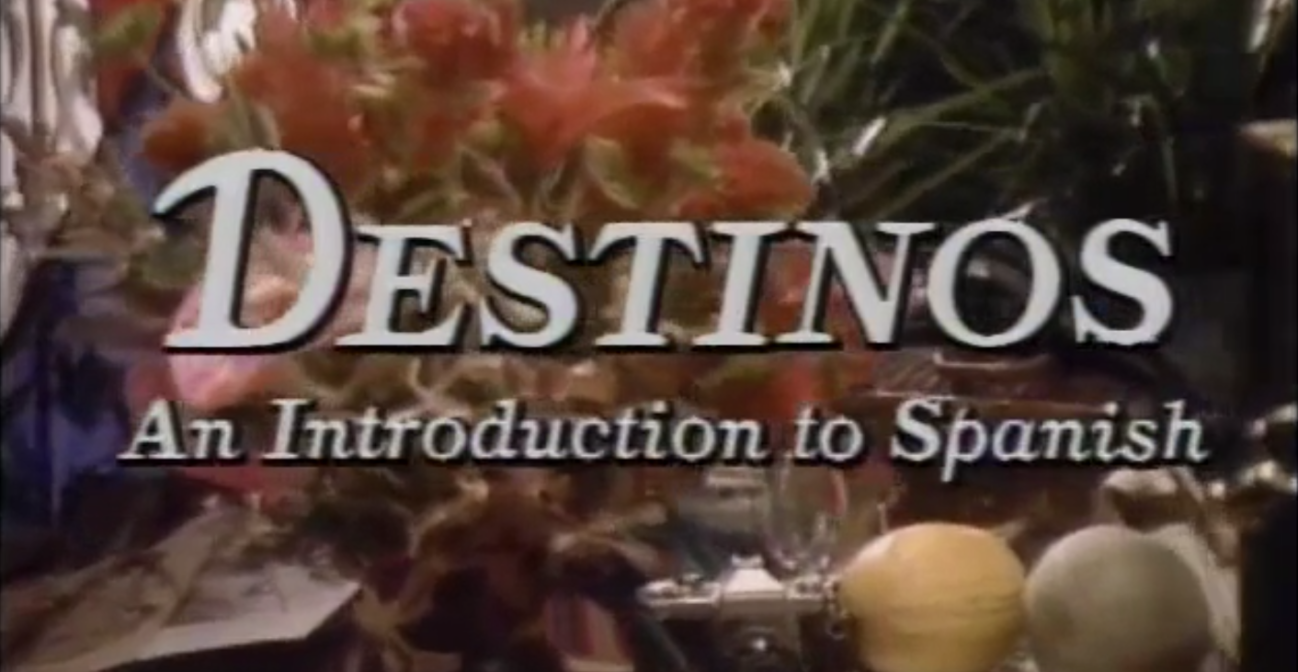 Destinos teaches speaking, listening, and comprehension skills in Spanish. This telenovela, or Spanish soap opera, immerses students in everyday situations with native speakers and introduces the cultures, accents, and dialects of Mexico, Spain, Argentina, and Puerto Rico. Understanding of Spanish and appreciation of many Hispanic cultures increase as students become absorbed in the mysterious and entertaining story. Closed captioning in Spanish can be used as a teaching and literacy resource.

Destinos teaches speaking, listening, and comprehension skills in Spanish. This telenovela, or Spanish soap opera, immerses students in a mysterious and entertaining story while viewing everyday situations with native speakers. It also introduces the cultures, accents, and dialects of Mexico, Spain, Argentina, and Puerto Rico, helping students understand a range of Spanish and appreciate many Hispanic cultures. The programs are closed captioned in Spanish and can be used as a teaching and literacy resource. The series is also appropriate for teacher professional development.

In the Watch section of the Destinos website, you can view the entire 52-episode Destinos series. With each 30-minute episode, you are drawn deeper into the mystery of Don Fernando’s past, while hearing and learning new and increasingly challenging vocabulary and grammar. You can further practice your Spanish with supplementary activities in the Practice section. At the end of each Practice activity, un paso más suggestions will allow you to take your learning further. Tips for Teachers and web resources provide additional support and encourage further learning

Every episode of Destinos covers new grammatical concepts, vocabulary, and cultural practices. The 52 episodes are divided into five destinations: La Gavia, España, Argentina, Puerto Rico, and México. As a learner moves from episode to episode and destination to destination, the content grows more challenging.

The Practice section of Destinos parallels the Watch section, in that the Practice activities are organized by destination. Each activity relates to one or several episodes, and provides opportunities to review the grammar, vocabulary, or cultural practices. In Practice, as in Watch, as you move from destination to destination, the content becomes more rigorous.

Watching a video is active teaching — you’ll want to pause and discuss plot developments, important expressions, cultural elements. It is essential to replay and discuss.

For beginner-level classes, certain scenes should be re-watched, to be sure students understand what’s going on.

As all episodes are available online, so episodes can be assigned as homework or for review.

Teenage students might giggle at the outfits and the hairstyles. Allow them to talk about this aspect of the series at the start as a means of diffusing their silliness.

Showing captions (which are in Spanish) changes Destinos from a watching and listening activity to a reading activity. Try leaving captions off, to challenge students.

Destinos allows you to introduce realia to students without having to bring physical materials into a classroom — this is especially valuable for distance-based learning.

Teaching Foreign Languages K-12 Workshop is a free learner.org course that examines research topics from the American Council for the Teaching of Foreign Languages National Standards as it applies across languages and skill levels.

Have students prepare skits where they reenact scenes from various episodes. Depending on skill level, the instructor can give students the script or have students listen and write down the dialogue. For schools with the time and technical facilities, students can film these scenes for classroom screening. Examples of student reenactments can be found on YouTube.

What happens next? Have students describe what happens to major and minor characters they met in Destinos.

What happened before? Have students write background biographies for characters, using information in the show, plus their imaginations.

Beginning students, who might not be comfortable writing full paragraphs, can write Facebook status updates for various characters.

Students can write and/or record a commentary about an episode, or a talk show where a character comes and “tells all” about an event or another character.

Have students use graphic organizers to help them gather and understand information about the episodes.

Funded by Annenberg Media and the Geraldine R. Dodge Foundation, and produced by WGBH Boston, Destinos premiered in 1992, and soon became the most popular Spanish learning series ever. Described as an “elaborately produced and suspenseful soap opera” by Variety (August 24, 1992), Destinos continues to be widely used today, both by classroom students and independent learners who can watch the series on learner.org. Since the episodes began streaming on learner.org, Destinos has become the most watched video series on the site. Destinos, both on VHS cassette and DVD, has sold more than any other Annenberg Media learning series or course.

Where Are They Now? Destinos Cast & Crew

Raquel Rodriguez: Liliana Abud
Mexican actress Liliana Abud continues to act in television and film and is also a screenwriter. She reappeared in Nuevos Destinos in 1998. She told Alianza News that she chose to star in Destinos “because it was an opportunity to teach my language to the Anglo-Saxon culture[.]”

Don Fernando Castillo Saavedra: Augusto Benedico
Born in Spain, Augusto Benedico emigrated to Mexico after the Spanish Civil War. In Mexico he had a long career in film and television. He passed away in January 1992, at the age of 82.

The following sites can assist with Spanish teaching and learning. In addition, the websites featured after each practice activity in Un paso más offer theme-specific learning opportunities.

Open Culture has a list of free podcasts for learning Spanish.
http://www.openculture.com/free_spanish_lessons

MisCositas is a site created by a Spanish teacher with activities, realia, stories, and links to other Spanish resources.
http://www.miscositas.com/

Audria has free Spanish podcasts that cover a range of topics.
http://www.audiria.com/

StudySpanish.com has a mix of free and for-fee tools
http://www.studyspanish.com

Destinos on the Web

Search for Destinos+Parody on Youtube and find student reenactments of scenes
http://www.youtube.com/results?search_query=destinos+parody&aq=f

Spring 1992“Destinos is an excellent introduction to the Spanish language.”

“This is a great way to learn a language.”

“It would be an invaluable resource in high school, college and large public library collections.”

“Viewers actually can learn Spanish while following the “Dallas”-like exploits of a Mexican industrialist and his family.” “The action and context of the story will enable them to follow along until the learning process kicks in.”

“Viewers learn Spanish by listening to the conversations and associating the dialogue with the locale, action, facial expressions, and body language.”

“Destinos…transports viewers from the New World to the Old, while illustrating the many accents and nuances of Hispanic cultures. There are good opportunities to build vocabulary by listening to conversations.”

“The series used in schools and colleges around the country. Destinos utilizes entertaining storylines and stresses learning the languages as they are spoken in various locales.”

“Two-and-a-half Stars.” “…as a supplementary tool it would allow students to catch the rhythm of the language in actual usage, as well as introduce them to facets of the Spanish culture.”

“…the language is basic enough to allow viewers who don’t speak Spanish to follow the plot without taking the course.”

The following Instructional Design is excerpted from
the Destinos preview book, published by McGraw-Hill.

Destinos: An Introduction to Spanish

Interested parties may exercise their rights of access, rectification, limitation of processing, deletion, portability and opposition to the processing, as well as the revocation of the consent given, and in any case, these rights may be exercised at the addresses stated in the heading of this contract by sending a copy of ID card, passport or any other document accrediting the legitimacy, as established in: https://us01.z.antigena.com/l/tU_puzsxkkraHjKp6pefXNB~ryn
TO48fHjz_a5GOsomX2SuJE22pLfaQfJLfbd-Z~4u79R~q2PEXXgk7cIV9dLC-lWEHon~lIKik3fdmTo6ESNdHw0ufrqST6-O0kMUt0jWTP-jo8zv8SxMSEmZIP5xpoAhBgw-Hxz6bAC7tfkrqERkt